Root Cause Analysis in Kaizen Lean 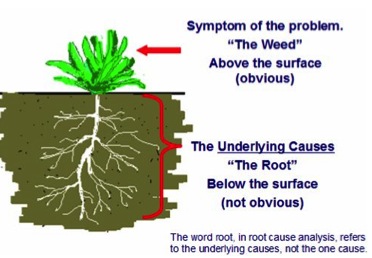 Why Why Analysis or 5 Whys is a well-known root cause analysis technique that originated at Toyota and has been adopted by many other organizations that have implemented lean manufacturing principles.By repeatedly asking the question “Why?” at least five times, you can successively peel away the layers of symptoms, which can lead to identifying the root cause of a problem.

The 5 Whys was originally developed by Toyota founder Sakichi Toyoda and was later used within Toyota Motor Corp. during the development of the Toyota Product System (TPS). At Toyota, 5 Whys is still a critical component of problem-solving training, and the method is still widely applied within the company when problems occur. The architect of the Toyota Production System, Taiichi Ohno, described the 5 Whys as “… the basis of Toyota’s scientific approach… by repeating why five times, the nature of the problem as well as its solution becomes clear.”1

A major advantage to the 5 Whys technique is that it is relatively easy to use and apply, and its easy application makes it a practical tool for root cause analysis in problem solving. Under a 5 Whys approach, it is possible to get to root causes in a relatively short period of time. However, as we shall see later on this article, ease of use and speed also need to be balanced with the risk of failure from recurrence of the problem should the 5 Whys fail to find the true root cause.

While many companies have successfully used the 5 Whys, the method has some inherent limitations, which can be resolved. First, using 5 Whys doesn’t always lead to root cause identification when the cause is unknown and Gemba investigation and causes verification is not done. Second, an assumption underlying 5 Whys is that each presenting symptom has only one sufficient cause. This is not always the case and there can be multiple root causes of each cause. Third, the success of 5 Whys is to some degree contingent upon the skill with which the method is applied; if even one Why has a bad or meaningless answer, the whole procedure can be thrown off. Doing Why Why Analysis requires a lot of practice and as long as focus is on Facts, Validating each cause at Gemba, 5 Why analysis is simple yet powerful approach.

Even Toyota has admitted some shortcomings with the 5 Whys method. Teruyuki Minoura, Toyota’s former managing director of global purchasing, commented at the 2003 Automotive Parts System Solution Fair held in Tokyo that the 5 Whys requires skill to use well and most important, should be grounded in observation, not deduction:

“When an error occurs, the first thing that needs to be done is fix the error,” says Minoura as he recalls that Ohno used to order them to ask the question ‘Why?” five times over because “that way you’ll find the root cause, and if you get rid of that, it’ll never happen again.”

However, Minoura emphasized that on-the-spot observation rather than deduction is the only correct way to answer a “Why?” question. “I’m always struck that the five-why method doesn’t seem to be working as well as it should be because there’s been a lack of practical training,” says Minoura. “The reason is that they end up falling back on deduction. Yes, deduction. So when I ask them ‘Why?’ they reel off five causes as quick as a flash by deduction. Then I ask them five whys again for each of the causes they came up with. The result is that they start falling back on deduction again and so many causes come back, that you end up totally confused as to which of them is important.

“Through real training, you’ll be able to discover dozens of problems and also get to their root causes. You’ll be able to make dozens of improvements. If you incorporate all the accumulated knowledge of root causes that you’ve got from always asking ‘Why? Why? Why? … ’ into your equipment, you’re going to have something that no one else can come close to. I don’t think it’s got anything to do with nationality; it all has to do with whether or not you’ve received the proper training. I feel, though, that the tendency to give that kind of training and education forms the basis of Toyota’s approach to monozukuri2.”3

In these comments, Minoura is emphasizing a key point of Toyota’s approach to improving processes: Go see and observe and study the actual process conditions to develop understanding and facts (known simply as “Go and See” in TPS parlance). In many companies, problem solving is a deductive exercise, oftentimes conducted in a meeting room where those doing the problem solving are separated from the actual process where the problem occurred. This separation encourages deductive thinking that is not necessarily grounded in what is actually happening, or happened, at the process. Most important, because it isn’t grounded in observation, where effects and their causes are directly observed, deductive thinking can quickly degenerate into hypothetical thinking. Minoura’s comment about “practical training” also hints at a missing dimension in many problem-solving efforts: going and seeing what is actually happening at a process, rather than conceptually applying tools and techniques to infer what might be happening.

RIB Consulting Consultants have expertise in training your organisation to implement Root Cause Analysis as part of Kaizen journey. RIB Consulting is one the leading Kaizen Consulting Organisation in Kenya, India, Dubai and Zambia