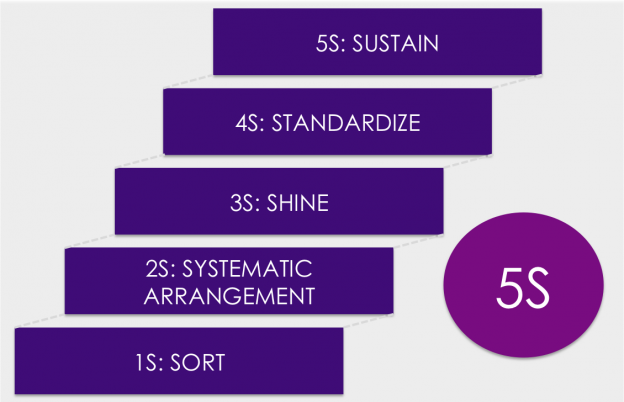 For many firms 5S seems like a logical starting point, and many have been convinced by lean consultants that they should begin their lean journey by implementing 5S. Yet, we should ask, is this right, or does it even make sense?

5S is a valuable member of the Lean Kaizen tool kit. Few would argue that it’s difficult to make improvements or approach world-class levels of process excellence with work areas that are poorly organized, unclean, unsafe, and not standardized. 5S is a systematic way to improve workplace organization and functioning by establishing the basic conditions that are essential to process stability. In addition, 5S is often a good way for firms to familiarize themselves with continuous improvement by involving and engaging workers to improve workplace conditions and organization.

Strengths of 5S as an initial improvement activity include the following:
• Successful implementation of 5S requires that processes be defined and process ownership assigned. This begins to create basic process team structures with assigned responsibility and accountability for process conditions and performance.
• Through 5S, process conditions start to become standardized, leading to the surfacing of abnormal conditions, which in turn can lead to problem solving, learning, and developing corrective and preventive actions.
• 5S begins to stimulate employee contributions and ideas for improvement. It is important for firms that begin their improvement journey with 5S to nurture the employee contributions which can flow out from 5S activity.
• Well-implemented, 5S can open up entry points into flow and pull, equipment reliability, standardized work, and value analysis.

However, pursuing a “5S first” approach can have drawbacks and pitfalls, including the following:
• If 5S is perceived as a program, it may take on a life of its own and become an end goal of a firm’s improvement journey. The proper role of 5S is to stimulate and shape a culture for the wider use of appropriate techniques that improve the functioning of a firm’s process system.
• 5S may not be an appropriate starting point for improvement if there are serious constraints to performance. For example, if a firm is capacity-constrained, focusing improvement effort at the bottleneck process that is limiting system capacity will have more effect than embarking on a companywide 5S program.
• 5S is a tool. If a firm blindly pursues 5S without understanding its proper role in a lean system, then the tool loses its effectiveness. If all you have is a hammer, then everything begins to look like a nail. If you don’t have the problems that 5S is designed to address, then don’t apply it—or at least get to it in a proper logical sequence.

In connection with the point above, avoid the danger of becoming a 5S “toolhead.” Business systems are sociotechnical environments. Tools and techniques must work together with humans in an integrated and systemic way to create value for customers. The blind pursuit and application of tools is antithetical to real continuous improvement through people.

Many firms fail to integrate the basic practices and routines of 5S into their daily work. If 5S is seen as something else that has to be done besides the regular work, then it has not been well-implemented. 5S practices must become routine and part of the work; that is the purpose of concepts like standardized cleanup and visual control. Great 5S is transparent 5S.

Many firms become 5S “score crazy” and obsess about the scores on 5S process audits, trying to get their processes to “level 5” as quickly as possible. That is just end-gaining to a target without paying attention to the means for getting there. What is more important than the 5S audit score is whether contribution for improvement is forthcoming from a process team, and whether the team is actively engaged and involved in thinking about improving their processes and work. When visiting a plant, I never ask to see a 5S score; I want to see what improvements the team has been thinking about, and executing, since its last audit or check. That is a better indicator to the level and quality of collaborative energy for improvement than a 5S score.

5S is not necessarily the only, or even the best way to initiate lean thinking and practice in an organization. Choosing a pilot or target process, and then beginning with standard work, can logically lead to value analysis and the application of other lean tools, including 5S. Defining the work method in a process provides a framework for evaluating whether proposed changes to a process and its work methods are indeed improvements.

Many of the problems firms experience with respect to 5S result from the current mania for copying. Much of the lean movement is built on the premise of copying what other firms have done, and one firm in particular—Toyota. In fact, just about every lean implementation can trace its roots back to the tools and techniques of the Toyota Production System (TPS).

The problem with copying is that it works against thinking, inquiry, and learning. Toyota’s approach to production grew out of its need to find a way to effectively compete with mass producers that could take advantage of economies of scale. The tools and techniques of the TPS are solutions to executing high-variety, small-volume repetitive production in a cost-effective way. Most important, as the developer of these solutions, Toyota had to think and learn how to solve its production problems in a way that could enable it to compete effectively.

Blindly copying the tools and techniques of TPS bypasses this thinking and learning. It also assumes that your company has the same problems as Toyota did, and that you can replicate Toyota’s success by implementing those tools in a similar way within your business system.

Rather than a tool-based approach to improvement, I think it is useful to think about the things that a firm has to do over and over again to improve its capability for serving customers. This includes defining and managing core processes such as those related to the supply chain, market demand, products and services, and product realization. Driving business improvement of these core processes is a key function of management. That improvement effort may lead to the use of appropriate tools and techniques to solve problems, improve process performance, and increase value-added benefits to customers. 5S may be one of those of tools, but for any given process it may not necessarily be the preferred starting point.

By all means, use 5S. However, use it intelligently and appropriately, and adapt its principles to your situation. Avoid letting 5S become an end in itself, and remember to effectively integrate it with your people and their work.